An animated short film for children about tolerance towards strangers. The proverbial “black sheep” will be bullied out of the herd but only the brave outsider can protect them from harm.

Jesús Ernesto Pérez del Barco;1954 born in Bolivia; since 1977 animation films; since 1995 realizing a series of animated films about migration and globalization for German and Swiss schools; since 2000 living in Lucerne, Switzerland; since 2002 Professor for animation at the Lucerne University of Applied Science and Arts in Switzerland.

Gerd Gockell born 1960 in Darmstadt; from 1980-87 studying at the Academy of Fine Arts in Brunswick; freelance animator for the “HR-Hessische Rundfunk” Frankfurt; 1988 he moved to London and worked on several film projects; 1990 founding ANIGRAF film production with Kirsten Winter in Hanover; various teaching appointments since 1992, including e. g. Brunswick, Singapore, Kassel and Potsdam; 2002-2011 Head of the Animation Dept. at the University of applied Science and Arts Lucerne, Switzerland; lives and works in Lucerne and Hanover. 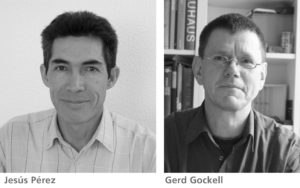