In Rome, a father accompanies his son by car. They are late, and the Rome-Lazio derby is
broadcasted on radio. The kid wears a costume with a cartoon hero, and he is afraid not to arrive in
time for his very special engagement. 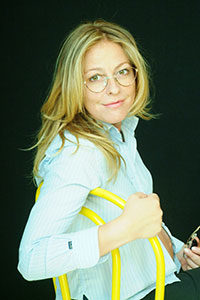 Isabella Salvetti is a screenwriter and director. She was born in Rome, Italy, where she lives and works.
In 1998 she moved to Los Angeles to attend the film production master’s degree at AFI. In 2009 she
attended the master’s degree R.A.I. in the screenplay of Script. She works as an assistant director,
production manager and screenwriter. She directed 5 short films: Barking, Un gesto innocente (An innocent
gesture), Una piccola fortuna (A small fortune), Buon Natale (Merry Christmas) e Due piedi sinistri (Two left feet).